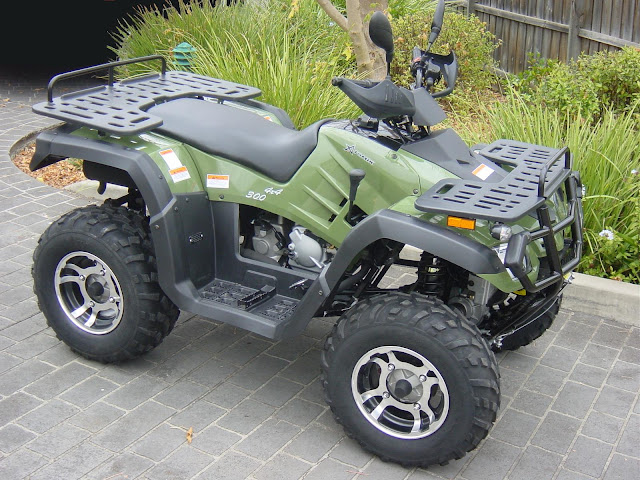 A quad bike or all-terrain vehicle ("ATV") is a usually four wheeled petrol powered vehicle designed to handle terrain ranging from flat surfaces to rocky, dirt, muddy or sloping offroad ground. The rider typically straddles the single seat of the quad bike like on a motorcycle and uses the handle bars for steering control. Most all terrain vehicles are intended for use by a single rider, however tandem quad bikes have also been developed. Quad bikes usually have 4 stroke engines, although quad bikes with 2 stroke engines have also been manufactured. Quad bikes are also referred to as an "ATV", "ATV vehicle", "offroad ATV", "quad", "farm quad", "military ATV", "four wheeler" or "quadricycle".

Two wheel drive quad bikes are typically smaller and lighter, with manual transmission and an ability to accelerate quickly. These can be loosely categorised as 'sport' quad bikes.

Other kinds of models of quad bike have also been produced, including:
- sports quad bikes or sports ATVs which are high performance machines designed to have high power, light weight, good suspension and a low centre of gravity and sometimes used for ATV racing; and
- kids ATVs/kids quad bikes, mini ATVs/mini quad bikes, youth ATVs/youth quad bikes designed for persons aged under 18 years of age.

Three wheeler quad bikes have also been produced although are not as common as the four wheeled quad bikes, and are considered more challenging to corner than the four wheeler quad bike models. This is because the configuration of one front wheel and two rear wheels means there is greater need for the rider to lean to the inside of turns to counterbalance the quad bike's weight to preserve the machine's stability.

Quad bikes are extensively used for agricultural uses and farming, due to their speed and their light weight (compared to other farm machinery and farm vehicles) which when used correctly leaves little to no tyre damage on the ground. Quad bikes are also popular for hunters, ranchers, construction workers at construction sites, and for recreational use such as with sand dune riders. 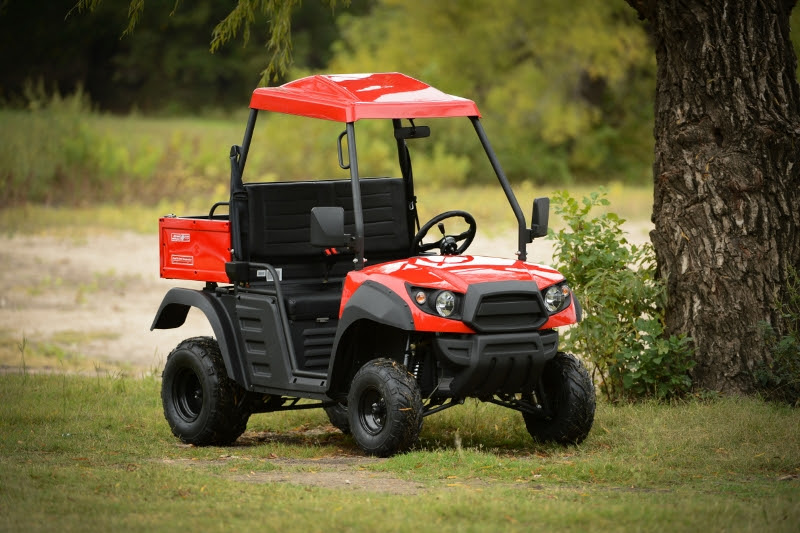 A side-by-side utility task vehicle ("UTV") is a small, two to six person capacity four wheen drive offroad vehicle. The side by side is also referred to as a "side x side UTV", "SxS", "SSV", "Recreational Off-Highway Vehicle" or "ROV", Multipurpose Off-Highway Utility Vehicle" or "MOHUV".

Unlike ATVs, UTVs typically have side by side seating and modern UTVs now regularly feature seatbelts, roll protection, four wheel drive and a rear cargo tray which may be manually or electronically raised. UTVs are also typically larger in dimension than ATVs, both in width and length, and have a larger payload capacity.

UTVs generally carry the payload below the top of the tyres, whereas the payload on an all terrain vehicle is carried above the fenders. As a result, UTVs are often safer than ATVs, as the vertical centre of gravity on the UTV is lower than that on the ATV due to the lower load positioning, resulting in greater stability.

Firstly, the UTV must be able to operate offroad. This means the UTV must be able to traverse over rough terrain, such as that encountered on farms and agricultural land, and manourvre around obstacles encountered such as rocks, fallen trees and natural water courses. This is assisted by features such as independent suspension and knobby mud tyres which soften the UTV's ride and add grip.

Secondly, the UTV must be able to carry cargo and equipment. This necessitates that the UTV must have strength in both the chassis and the rear tray, as well as have a petrol engine or diesel engine with enough horsepower and torque to haul the payload.

In June 2016 SafeWork NSW commenced a NSW wide Quad Bike Safety Improvement Program. SafeWork NSW says that the aim of the program is to make the use of quad bikes on farms safer through the implementation of harm prevention measures in the workplace. The program offers two rebates of up to $1000 each for eligible farmers and one rebate of up to $400 for farm workers, and is not limited to members of the NSW Farmers Association.

In particular, SafeWork NSW is offering farmers a rebate of us to $1000 for each agricultural side-by-side vehicle (SSV). SafeWork NSW considers that "Agricultural SSVs are just as versatile as quad bikes when used for farming activities".Before looking for quad bikes for sale, ATVs for sale or UTVs for sale, make sure you find out more about the SafeWork NSW rebate offer. More information on the Quad Bike Safety Improvement Program and the rebate is available by clicking here.

The 2017 Dakar Rally held in South American countries Paraguay, Argentinia and Bolivia saw for the first time the introduction of the new SSV category. The SSV category (Group T3 Modified Cross Country Vehicles - Lightweight) comprises light weight four wheel side by side buggies with a maximum displacement of 1000cc plus a turbo petrol engine, and lightweight vehicles of over 1050cc that are equipped with a motorcycle engine or an engine derived from a motorcycle. This introduction takes the number of categories in the Dakar to five, with other categories being bikes, quads, cars, and trucks. The SSV category is anticipated to continue to be included in the next Dakar Rally.

Unlike other Stores & Dealers we ship almost anywhere!

Australia Wide Delivery!  WE CAN SHIP TO: